A new batch of web developers are set to join the IT Industry as Tuitt’s 16th Batch of Night Class students have officially finished their training!

Their graduation ceremony was held on February 28th at the GEMPC Building in Timog Ave., where they celebrated the culmination of the 6 months they learned full stack web development with Tuitt.

Instructor Christine Llapitan welcomed the graduates with her opening remarks. She congratulated the class for graduating and achieving something incredible. “You’ve been training for 6 months and here you are now. You all came from nothing and now you’re something.”

She also talked about how much the bootcampers grew together and came to mean a lot to one another, and how they should keep that friendship up despite moving on. “You’ll miss each other, especially the ones who helped you out when you were in need. All of you guys are just a message away. Make sure you ask each other how you are.”

Following the opening remarks, our guest alumni speaker Rellie B. came up to speak and share his experiences with the graduating class. Mr. Rellie originally started out as a bookkeeper but he knew he wanted to change careers early on. He resigned from his bookkeeping job and immediately started studying how to code on his own. But he didn’t really get far, and that’s when he started looking for bootcamps. “I searched online if there were coding bootcamps in the Philippines and I found Tuitt.” Mr. Rellie has since successfully joined the IT Industry as a web developer.

To finish off his experience sharing, Mr. Rellie shared three important tips to climb up the workplace as a software engineer.

After sharing his three big tips, Mr. Rellie once again extended his congratulations to the graduating class.

After Mr. Rellie’s congratulations, it was finally time to award the students for their successful training! Certificates of Completion were given to the graduates by Tuitt Group CTO Allister Alambra and Instructor Christine Llapitan 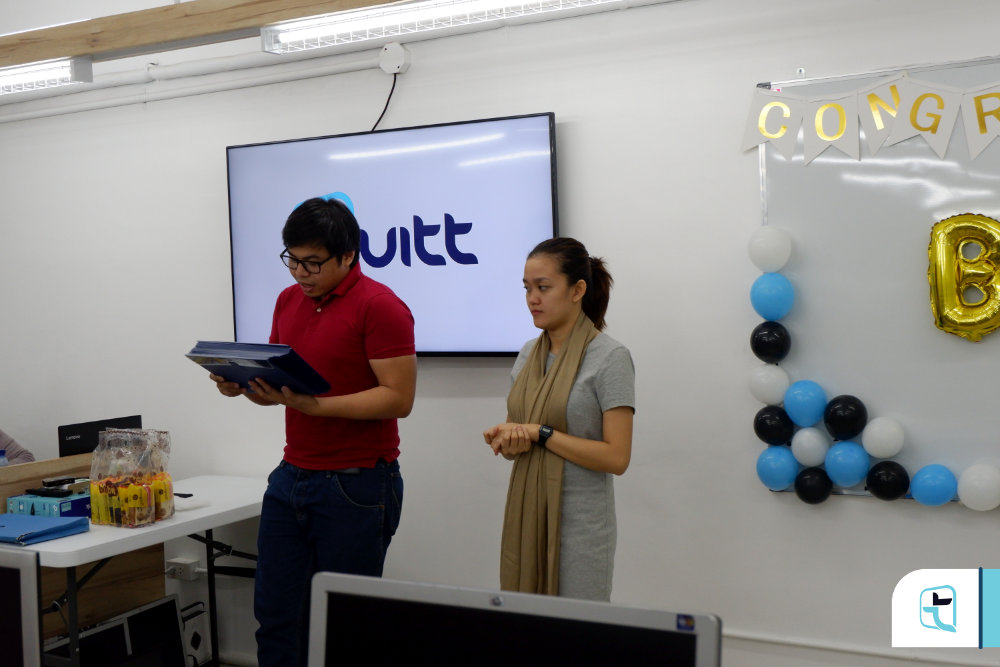 The graduates of the Batch 18 Day Class are 15 in total.

After the certificates were all given out, it was time to hear from our special guest speaker from the IT Industry, Mr. Mikhael P.

Mr. Mikhael is a graduate of Computer Science from De La Salle University, and became a principal engineer in Canon after graduation. His development skills led to his assignment to Japan for a time. He shared 3 things he learned about the coding profession during his time at Canon with the new graduates:

After sharing his three learnings, Mr. Mikhael thanked the graduating class for doing their part and improving themselves and he hopes they all become assets to the industry. “Like Steve Jobs said, ‘Stay Hungry. Stay Foolish.’”

After the insightful speech by Mr. Mikhael, we headed into one of the most exciting parts of the event: The Special Awards!

As she accepted her award, she shared some words of wisdom with her fellow graduates and said to “Keep taking notes and always practice because that’s important in our industry. Keep learning, guys!”

“Focus on the goal. Be clear on what you want to do“ Mr. Louigi said as he accepted his award in front of his peers.

She accepted her award with tears in her eyes and love in her heart. As she stood in front of her fellow graduates, she told them “I’m proud of us not only in our ability to code but also in our perseverance. We wanted this so bad that we kept on coming back even if it was hard.” She went on to thank her classmates for all their help. “We cannot do it alone. We need each other (and Stack Overflow).”

Next were the Student Voted awards, where the recipients of said awards were voted by their peers.

First up was the “Awesome Attitude Award”, which was won by Aaron G. He received the award with (you guessed it) an awesome attitude!

The “Enthusiastic Learner Award” and “Most Likely to Establish their own Startup Award” were both won by Don D., who accepted the awards with big smiles.

The “Outstandingly Organized Award”  and “Really Responsible Award” both went to Joyce P. to the joy of her peers.

And finally, the “Student Best Able to Teach Others Award” went to Aljhon M. much to his surprise!

After all the awards were given out, Tuitt Group CTO Allister Alambra stepped up and gave the closing remarks for the ceremony.

He started off by thanking all the graduates and mentioned how glad he was that they all pushed through even though the bootcamp was hard. “I know these 6 months have been really tiring but you all have to give yourselves a pat on the back. Considering you have daily lives outside of this, it’s commendable how committed you all were to learning how to code.”

He then went on to give the graduating class his final words of advice. “Keep learning continuously because it never really ends and stay humble. The moment you feel that you know everything is the moment that you fail.”

And with that message, he congratulated the Tuitt graduates once again and welcomed them all to the IT Industry as Web Developers.

With that, the ceremony ended and it was finally time to enjoy the festivities and partake in a mini-feast prepared for the celebration.

Congratulations once again to the graduates of the 16th Batch of Night Classes! We wish you all the best in your IT careers!